Normally, I live and let live, except if you come after me, my family, my pets, or my business, then I will stand up and fight. Social Justice Pansies have infiltrated all parts of life, families, businesses, etc. Social Justice Pansies make decisions on what THEY consider to be offensive, then proceed to cancel, bully, and threaten others who do not believe the same way they do. Somehow, these Social Justice Pansies have decided their opinions are the only ones that count and they will ruin you if at all possible if you dare to speak out and tell others what you believe (if it's different from what they believe). SJP's will say they are for free speech but only if that "free speech" agrees with them, if not, then it's automatically called "hate speech" or "racist" or whatever other derogatory term they decide to use at that moment.

I am here to tell my story of what Social Justice Pansies have done to me, how it cost me money and a lot of time for a total BS reason.

In August of 2020, I received an email from Shopify who WAS my ecommerce platform or web host for three of my online stores. The threatening email advised me that if I did not remove every Rebel Flag product in my online store, that they would shut my store down. Mind you, I am their customer, I PAY THEM. Not only did I pay them a monthly fee for each store for their hosting, I also paid them a percentage of my sales as they also were my credit card merchant account (which is how we are able to take credit cards at our online stores). The owner of Shopify is Tobi Lutke, he is the second richest man in Canada, a billionaire in fact. Hey, I have zero problem with that as I am a firm believer in capitalism and Tobi Lutke found a way to make himself a billionaire and that's awesome, more power to him. However, he's taken that "power" of being a billionaire and brought in his liberal political beliefs and had his "legal department" harass and threaten and bully and censor the very customers (us) who made him a billionaire. See, Tobi Lutke, now has enough money to last him the rest of his life, so he does not care about we peons, (his customers) with small businesses.

To explain my situation, about 20 out of over 1400 products I have been selling, had the Rebel or Confederate Flag on them. However, for me, the last few months, these products were the main things I have been selling and therefore if I took those products off of my site, it would hurt my bottom line and my ability to make a living. But see, Tobi Lutke does not care about me, a small business owner, who helped make HIS business a wildly successful one, he's got all his money, if I and other small businesses went out of business or were not able to make a living, it obviously did not matter to him. The ONLY thing he should care about as far as products go is if they are legal or not. All of my Rebel Flag products were perfectly legal and indeed innocent products. For example, I sell Rebel Flag motorcycle helmets, Rebel Flag vest patches, Rebel Flag vest extenders, Rebel Flag gloves, etc. I've been selling them online since I started this business back in 2003. Somehow it has not been an issue until this lovely year of 2020, the year the world lost its collective minds. The year that the Social Justice Pansies decided Cancel Culture rules and again, if you do not believe the same way that they do, they will try their best to censor you, bully you, ruin you, put you out of business or whatever other thing they can do to destroy you.

So, I could have taken the easy way out and removed those 20 or so products that depict the Rebel Flag and been done with it. However, I am not one to lie down like a door mat and let people who THINK they know better than I do, stomp all over me. No way, no day!

So, even though it cost me money and a whole lot of time and extra work, I have now moved three stores away from Shopify and their censorship and moved to a platform that only cares whether the products are legal or not, so here we are.

See, I don't care if you hate or dislike the Rebel Flag. That's your prerogative, that's your choice. If you don't like it, then do not buy it, no one is forcing anyone to buy anything. However, these radical Social Justice Pansies ARE trying to force merchants like myself to remove products they find offensive. Who or what gives them that right?

After I received this threatening and hateful email from Shopify, I started doing some research. I found stores using Shopify that are selling, wait for it............... Nazi Flags and Nazi products! Don't you find it odd that Shopify has not threatened and bullied those merchants and told them to remove all products depicting the Nazi Flag? Yet they were all over me and my three stores for a few Rebel Flag products. The hypocrisy here is astounding and it should also tell you something. Shopify claims that my Rebel Flag products were considered "hateful content". So, who exactly makes the determination on what is considered "hateful content". I don't consider the Rebel Flag to be hateful content, however, I do consider the Nazi Flag to be hateful content, but guess what? That's not for me to decide. I do not have the right to say that the merchants selling Nazi Flags should be censored or have their products removed just because I find them offensive. Folks, if we all start looking for things to be offended by and do our best to get those things "canceled", where or when would this ever end? I find XYZ to be offensive and you find ABC to be offensive, before you know it, the entire alphabet has been canceled. Today, it's my Rebel Flag products, but tomorrow it might be something YOU treasure. Will the next flags to go be the American flag or the Christian flag? What after that?

We must not comply with or bow down to these Social Justice Pansies, we have to stand up and FIGHT! My way of fighting against this cancel culture BS is to do what it took to move my stores away from those who would censor me and bully me and indeed threaten me.

During this trying time, I also found many others who were selling Rebel Flag products, who were also censored by Shopify. For me, it was about 20 products out of about 1400 but for some of these small business owners, their entire stores were centered around the Rebel Flags and if they complied with Shopify's demand to remove them, they would have no store and no income. I talked to a couple of merchants who were thinking of bringing a lawsuit against Shopify because of the loss of traffic that happens when you move to another platform as your products URL's change and many of your website visitors end up on a 404 Page Not Found and just leave, thinking you are out of business. It's hurt many people who are just trying to earn an honest living, people like me. My husband served in the military for 26 years and I was right there beside him, sacrificing much for my husband to be gone a lot of the time. Just so we can be told what we can or cannot sell by these Social Justice Pansies? No way!

Consider this a review of Shopify. If you are planning on moving your store or are looking for an ecommerce platform to start selling online, unless you like to be told what to do and you like censorship, I would NOT choose Shopify. Not now, not ever!

Let us know what you think in the comments below. We would love to hear from you. If you disagree, that's fine, but give a valid reason for why you disagree. Thanks for "listening". 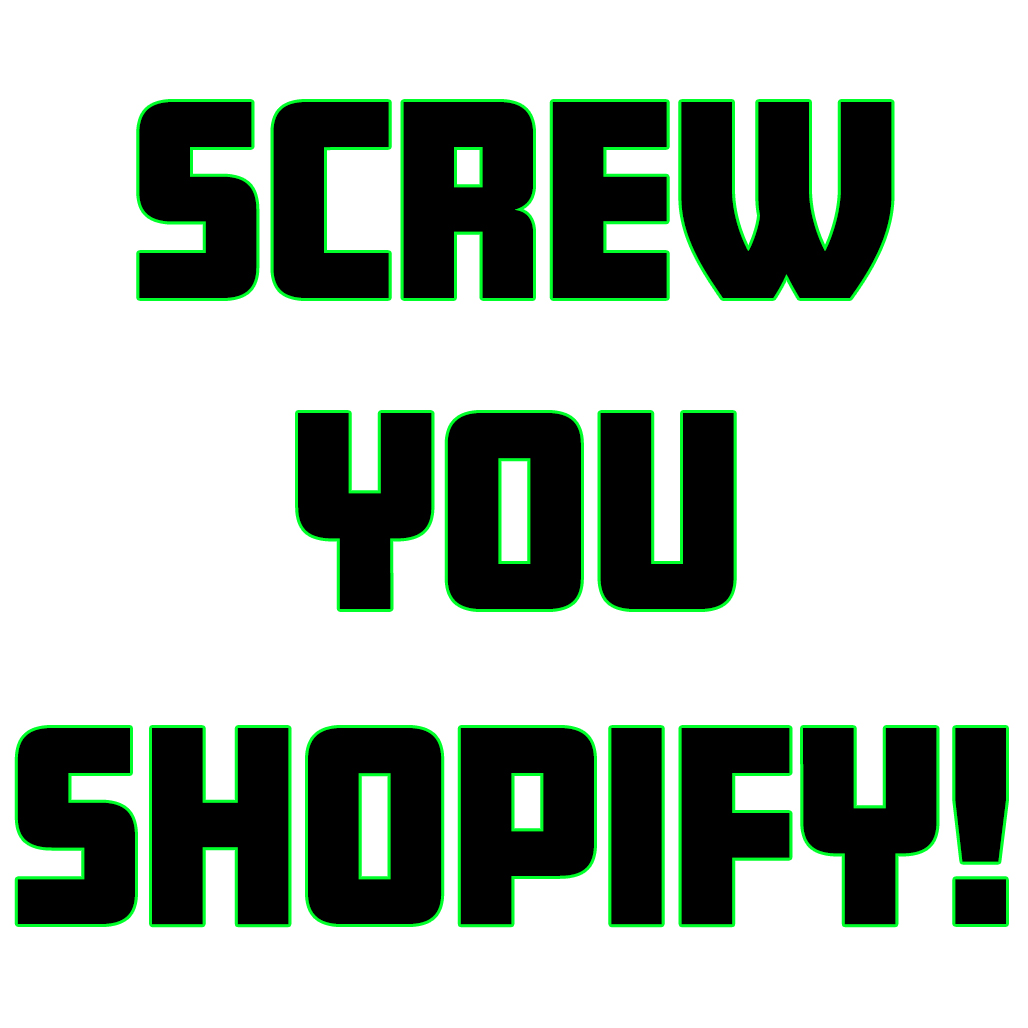